You are here: Home>Topics>Mail Coaches 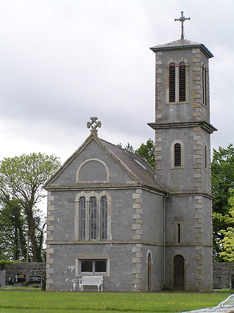 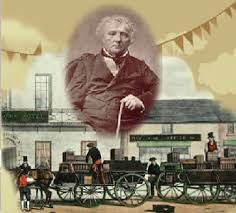 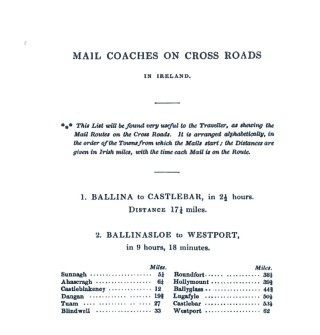 Charles Bianconi was born Carlo Bianconi in Tregolo, Costa Masnaga (Italy) on September 24th 1786, he moved to Ireland in 1802. He served his apprenticeship as a printer. In 1804 and not yet 18 years old, he decided to stay in Ireland and set up his own print business. He moved to Carrick – on – Suir and later to Waterford, before finally establishing himself in Clonmel.

Bianconi had noticed that public transport was not available in Ireland. He had difficulty in transporting his own wares around the country. Having done his research he had a good idea of what type of transport was required and set about establishing it.Charles Bianconi revolutionised public transport in Ireland with the use of horses and carriages. He established a network of routes, which eventually covered most of Ireland. Bianconi’s cars were punctual, cheap and comfortable. He set up a workshop in Clonmel to repair and manufacture bigger cars. Eventually Bianconi built bigger cars drawn by four horses and carrying up to twenty passengers. Carriage making continued in Clonmel up to the 1940’s. At its peak there were 100 cars, 140 stations, 100 drivers and 1,300 horses providing cheap regular transport between the main towns and cities.

In addition to the main routes, there were also “mail coaches” on crossroads. A passenger travelling on one route could get off at certain towns and change on a crossroads route to another town on another route. It was such a crossroads service (between Ballinasloe and Westport) that came thorough Mullaghmore. The coaches had to have a change of horses at stations along the route. One such station was at Kelly’s house (now Hussey’s house) in Mullaghmore. The horses were driven hard between the stations. They were then fed and rested until the next car came along. There was also a station at Glentane which served the Dublin to Galway route. When the railways were introduced to Ireland, Bianconi did not resist them, but adapted his routes to meet changing times, integrating both transport systems.

Bianconi died on 22nd September 1875 at his home Longfield House, Boherlahan, Co. Tipperary. Having donated land for the construction of Boherlahan Church, he wished to be buried on the grounds. He, and his family, are buried in a side chapel, separate from the parish church in Boherlahan, approximately 5 miles from Cashel, Co. Tipperary.