You are here: Home>Topics>Christmas Customs

Traditional Christmas customs and how they originated. 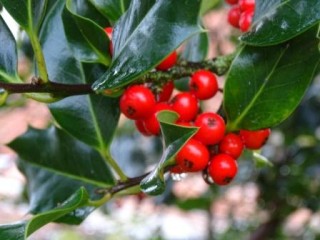 For many of our ancestors, Advent (the four weeks leading up to Christmas) began with a bucket of whitewash in hand. This annual painting of outhouses was one of the most popular of rural Irish Christmas traditions. It was carried out mainly by the men folk while the women scrubbed the interiors. It dates back to pre-Christianity and is generally regarded as the ancient version of spring-cleaning, carried out prior to the Winter Solstice when daylight hours shrink to just under seven and a half hours. With the arrival of Christianity the tradition was rebranded as a homely preparation for the arrival of Mary, Joseph and the new-born baby Jesus.

The sending and receiving of Christmas Cards is hugely popular. It isn’t the oldest of Irish Christmas traditions by any means but there was another element to it — the inclusion of a long newsy letter, often with some photos and some money (pounds or dollars) — that harks back to the days of mass-emigration from the island. Back then, a letter from a long-separated family member would have been the season’s best present. Today, Irish Christmas cards are big business with cards exchanged between work colleagues, neighbours and friends, as well as family members near and far.

Candles in the Windows

This is one of the well observed of Irish Christmas traditions and has changed little over the years except in its increasing popularity. Just one candle used to be placed in a window as a sign of welcome for Mary and Joseph on Christmas Eve but nowadays lit candles, usually electrically or battery powered, are placed  in all downstairs and upstairs street-facing windows throughout the festive season.

Holly remains a popular adornment and dates back to the days when most of our ancestors would have decorated their home with this freely available plant.  Holly, ivy and mistletoe were originally used in pre-Christian times to help celebrate the Winter Solstice and ward off evil spirits.  When Christianity came to Western Europe the tradition survived  but was given Christian meanings.

Decorating a tree in the dead of winter was a Pagan custom that has survived with little variation except that the dressed tree (now decked in baubles and fairy lights) makes its appearance earlier each year!  As with the rest of the decorations, they are now put up in many homes and offices at the beginning of December and remain in place until the 6th January.