You are here: Home>Topics>Mullaghmore Cattle Drive

Re-enactment of the Mullagmore Cattle Drive of 1916 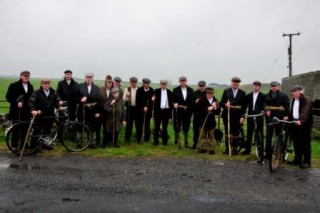 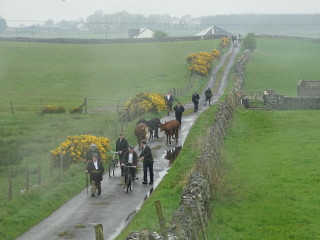 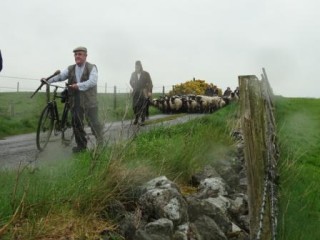 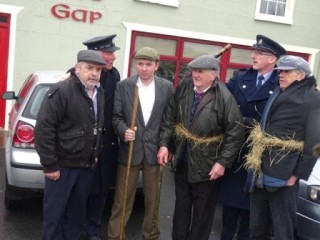 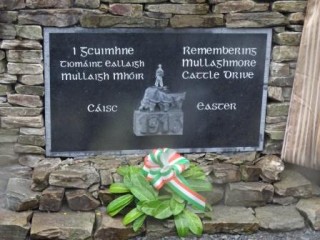 Earlier this year Moylough Heritage Society and the good people of Mullaghmore gathered together to re-enact the Mullagmore Cattle Drive of 1916 in honour and remembrance of the families from the locality who made great sacrifices to get their just rights to the ownership of their land.

At the end of the 19th century the land lord system was in decline. Many of the landlord class had no desire to live in the west of Ireland preferring to live in cities like London and Dublin. After local land agitation, the British government were buying up these estates and making land available to the local tenant farmers. For some reason, this was not happening in areas like East Galway. Land there was falling into the hands of so called graziers. The four townlands of Mullaghmore North, Mullaghmore South, Mullaghmore East and Mullaghmore West belonged to the Jameson family who also owned the adjoining town land of Windfield Upper, Windfield Lower and Windfield Demesne where their house was. Jameson had the land here on Mullaghmore leased to the Rev. O’Rourke, a Protestant Minister who lived in Moylough. O’Rourke then let the land on an Eleven month bases to 3rd party tenants who were called graziers. These people were people who had money, usually shopkeepers and publicans, like our friend Mr. Fleming who owned a shop and Public house in Kilkererin.

The cattle were driven 15 miles

Two cattle drives took place in the area at the time. The first on the 24th April, Easter Monday, the same day the Historical Rising started in Dublin. On that day cattle were driven from a section of land called Grow. The cattle were driven 15miles to Comefield near Ballinasloe, to the owner Mr. James Cooke. He agreed not to return his stock to Mullaghmore after the men explained their desire to have the land divided amongst the local tenant’s. This might have been the end of the matter but for an entirely different outcome to the second drive on the following Saturday April 29th. This was the cattle and sheep drive to the owner Mr Patrick Fleming of Killererin, a distance of about five miles on which the re-enactment was based.

When the stock driven by 19 Mullaghmore men arrived in Kilkererin, Mr. Fleming was furious and threatened to shoot them. He reported the matter to the RIC station in Barnaderg. The 19 men were later arrested, brought to court in Dublin and sentenced to 4months in prison. 15 of the younger men were given a stay of execution to see how they would behave. The four older men Martin Boyle, Patrick McHugh, Thomas McHugh and Thomas Donoghue were sent to Galway jail which was situated where Galway Cathedral is today. William Ward, an officer of Local Tenant Organisation, had his stock seized to raise money to pay costs. The local land league had money available and paid the fine to release his stock.

The Aftermath of the Easter rising

According to the 1916 newspaper reports, they had carts with them in case any of the sheep failed to walk. These people had great respect for animals and would not want them injured in any way. Likewise they had respect for the owner of the stock. They could have driven them onto the road and let they stray, but no they delivered them safely to their owner. Many of the 19 had small holdings of their own, some as little as five acres. These men deserve our respect for what they achieved. Grow land was divided in the 1920’s less than a decade after the cattle drive and practically all the families involved benefitted from the division. We must remember the wives and families of the men who went to jail. News of the aftermath of the Easter rising would have spread around the country and talk of executions and deportations to British jails, must have worried these simple people regarding the fate of their loved ones. Martin Boyle, Patrick McHugh, Thomas McHugh and Thomas Donoghue were released some months later and returned home to a hero’s welcome of fires and celebrations. This part of the story was enacted in a restored traditional cottage generously shared by Eugene & Winnie Burke and enhanced by gifted local musicians and story tellers. A lasting plaque on stone was erected in the memory of the Cattle Drive and the people involved. Cormac O’Reilly a master sculpture produced this magnificent piece & Martin & Christina Coyne provided an appropriate and safe home for it in Grow, Mullaghmore.