The original monastic hermitage at Eskerstephens would have been a circular enclosure similar to a ring fort. 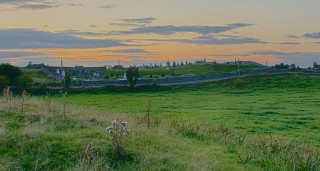 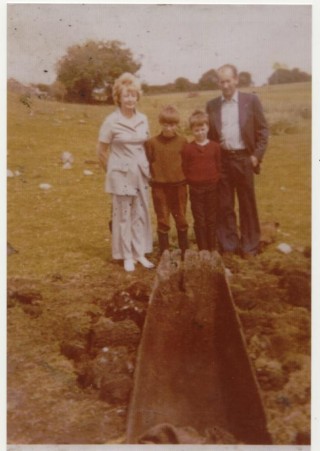 The original monastic hermitage at Eskerstephens would have been a circular enclosure similar to a ring fort; this layout can still be seen in the shape of the current outer stone wall.  The enclosure and the building would have been made from timber which was the traditional building material of the time.

The use of “dísert” in the place-name indicates that it started as a monastic hermitage.  The area in question had a supply of water from the local lake, plentiful wildlife and an abundance of wildflowers and herbs both for food and medicinal purposes.  While its’ remoteness would have removed the monks from the distractions of everyday life, they were also required to be charitable and look after their brethren in need.

In the mid 1970’s local man, Michael Hogan discovered two oak log boats (dug-outs) on his land to the east of the graveyard.  It was dated as early 11th century in Queen’s University, Belfast using the dendrochronological method (tree- ring). It’s believed that their abandonment in such excellent condition might be due to the destruction of the monastic site by warring native chieftains, as was common at the time.

Because of its’ pre-existing ecclesiastical history and strategic location on the esker system, which were the route ways of the time, the site was rebuilt in stone.  Initially it would have been a simple church with possibly an adjacent cell for living accommodation.

Evidence of a Church.

During our research in the graveyard we uncovered physical evidence of the church.  Firstly a moulded stone in the Romanesque style, possibly part of a window or door with diagonal tooling made by and adze (a small axe).  This would date to late 12th to early 13th century.  Because it was ornate for it’s time it indicates that it was a high status church, possibly looking to be recognised as a parish church.  The place-name “Templemoyle” is further evidence of this in that it was the term used in the 13th century for a church site.

There is another stone, part of a Gothic door frame, plainer in style, with punched dressed tooling on it which dates to the 15th century.  We believe that the church was being renovated and extended over this period of time.  Some of the original walls and lime mortar are still visible. Part of this renovation would have seen a two storey structure built on at the end of the existing church, this would have been used as living quarters for the priest, as would have been the norm at this time.

Christy Cunniffe, Field Monument Officer, found a quern stone, (used for grinding corn), with an incised cross on it.  This also appears to be linked to the church.  It was discovered in the new section of the graveyard where all the exposed gravel used to be.  It dates to about the 12th or 13th century due to the form of incised cross that it bears.  The Church brought in a rule, called the “Right of Multure,” whereby parishioners had to bring their corn to the church mill for grinding.  People were required to bring their own querns to the local church where they were broken so they could not be used again.  Often broken fragments are found on church sites, sometimes used as building material in the church fabric.  Some scholars argue that the placing of a cross on the quern was a sort of licence to own a quern given by the Church.

To date we don’t know at what stage or why the church on this site went into decline.  Perhaps another church in the area gained precedence over it