The customs used have changed throughout the centuries but the purpose of the wake, as in times past, is to pray for the dead and to sympathise with the relatives of the dead person. 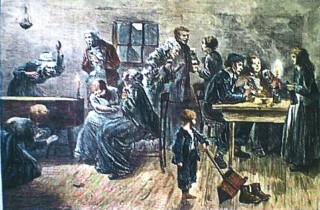 The waking of the dead is a very ancient custom which is still very much part of Irish life to this day. The customs used have changed throughout the centuries but the purpose of the wake, as in times past, is to pray for the dead and to sympathise with the relatives of the dead person.

Before funeral parlours existed corpses were laid out in their own home. In some homes as soon as the person had died the window was opened to let the spirit out. The usual tradition was that three women would wash the body and lay out the remains in a shroud. A crucifix was placed on the chest and rosary beads around the fingers. Candles were placed around the body. Neighbours, friends and relations would then begin to call to the relatives, in some cases “keening” began once the corpse was laid out.

A wake could often last for three days. During the daytime it was a sombre affair but usually the night time was full of dancing, singing and playing games. Snuff was left out for the guests to use. Stories would be told about the remains, all in praise of a life well spent. The remains were never left on its own, even through-out the night close friends and relatives would sit by the body.

A wake could be quite costly also as the relatives wanted to give a good “send-off” to their loved one. There would be feasting and drinking which in some cases would be excessive. Statute 20 of the Synod of Tuam (1660) ordered people to give up excessive drinking and feasting at Catholic wakes; and it suggested that the wrongdoers be advised to give most, if not all, of the money spent in that way, to the poor as alms, or else to spend it on Masses for the souls of the dead.

When it was time for the corpse to be brought to the Church or graveyard the coffin was carried out of the house feet first and would be carried by close relatives. The longest route would be taken to the graveyard. The neighbours would have the grave dug and would wait after the burial ceremony to close in the grave.

Comments about this page