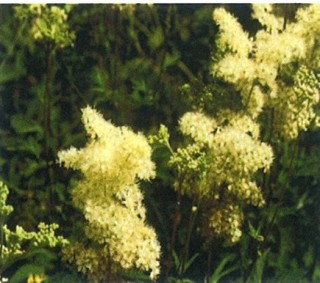 Meadowsweet was one of three herbs, (along with Water- Mint and Vervain) held most sacred by the Druids. It was used as a “strewing herb” i.e. to strew on floors or to stuff mattresses in order to fight infection as the plant has disinfectant properties, and to overcome smells. Its’ name may also come from “medesweete” as it was used in the brewing of mead, a honey based drink, for flavour. It contains the same ingredient as aspirin and the drug took its’ name from Spirea the old botanical name for Meadowsweet.

Yellow Iris is also known as “Flaggers” because of its’ resemblance to a waving flag, they are also called “Shellastrums” which is a slight variation on the Irish name. The “Fleur de Lys” which was the heraldic emblem of the French Kings is actually the Yellow Iris. Lys is a river in Belguim where they grow abundantly. It was used to treat bruises and oil extracted from it was used as a rub for joints and sinews, the powdered root was used as snuff and the seeds roasted to give a coffee like drink. The flowers were placed in a “Teach Aillis” (sweat house or ancient sauna) as a treatment for rheumatic pains. The flowers also gave a yellow dye and the root mixed with sulphate of iron a black dye.

The Common Daisy was used in the treatment of bruises and wounds. It was used in herbal tea and as flavouring in honey.

Germander Speedwell despite its’ tiny size had many uses it was believed to treat contagious fevers and be good for skin irritations; it was used in the treatment of smallpox and measles. It was also said to purify the blood and treat coughs, asthma and catarrh. It was also considered a lucky charm for travelling.

If Wild Thyme is growing in an area it is a sign of good air quality. This is both an anti-bacterial and anti-fungal herb used both as a disinfectant and antiseptic, it is also a food preservative. It was used in liniments and massage oils to help ease rheumatic pain and as a treatment for headaches. It is a good source of nectar for bees and of value to bee-keepers.

Yarrow was highly regarded as a herb to stop bleeding hence some of the names its’ known by “the military herb,” “soldier’s wort,” and “wound wort,” the leaves rolled up and stuffed in the nostril was said to staunch nosebleeds, it was also said to ease toothache and used as a tea to treat colds. Boiling it and washing the scalp with the liquid was reputed to be a cure for baldness!

This is also called “Hop Clover” and like all clovers is a nitrogen fixer in soil and a source of animal fodder, it is also taken to be a sign of firm footing in marshy ground. The leaves can be eaten.

This is also called “Hop Clover” and like all clovers is a nitrogen fixer in soil and a source of animal fodder, it is also taken to be a sign of firm footing in marshy ground. The leaves can be eaten.

A source of nectar for bees and a fodder plant for livestock, toxic to humans. It was used to produce dye.