St. Brigid shares a name and feast day with a Celtic goddess. 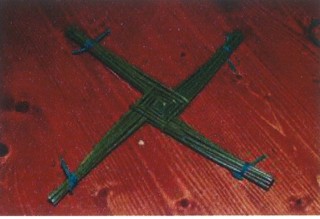 St. Brigid shares a name and feast day with a Celtic goddess from whom many of the legends and folk customs derive. She may have been born in Kildare, but there is a tradition that suggests Faughart in Co. Louth as her birthplace.

It is widely believed than her mother Brocca was a slave in the household of Dubthach, a Leinster chieftain who was Brigid’s father. Therefore Brigid was born into slavery.  They were banished by Dubthach’s wife to work for another master.  Brigid became known for her skills as dairywoman and for her generous and kind nature.  This eventually gained freedom for both her and her mother.

Brigid is not only one of the patron saints of Ireland, but also regarded as the patron of poetry, healing and smithcraft. She is viewed as the protector of mothers and new born babies.  She is also the patron of dairy farmers and workers (in religious art she is often portrayed with a cow); fugitives abused children and the poor.

Her miracles always involved the giving of alms and the rewards of doing so. She received the veil from St. Mel of Longford and began by founding a convent in Clara, Co. Offaly.  From there she moved to found an abbey in Kildare (a joint house for both nuns and monks).  Legend has it that she asked the King of Leinster for as much land as her cloak would cover, he agreed, however her cloak grew to cover the Curragh, and he had to honour his bargain and give her the land in question.

As abbess Brigid held a great deal of power – the abbesses of Kildare had an administrative authority equal to that of a bishop until 1152.  The abbey became a centre of learning, religious studies and art.  It was one of the first places to produce the illuminated manuscripts that Irish monasteries became famous for.

According to the legend St. Brigid made a cross from rushes for a dying man she wanted to convert. The tradition of making crosses from rushes survives to this day, there are several different versions of the said cross. It is believed that hanging a cross in the home protects it from fire.