You are here: Home>Topics>Ancient Festivals

In Neolithic Ireland people aligned their monuments to the major solar events. 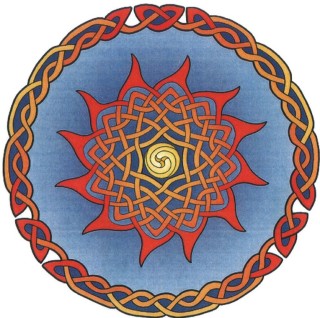 In Neolithic Ireland people aligned their monuments to the major solar events: the Spring Equinox, the Summer Solstice, the Autumn Equinox and Winter Solstice. The solar year was further divided to mark the halfway points between these events, giving rise to cross quarter days and the four main fire festivals of Imbolc, Beltaine, Lughnasa, and Samhain.

This was the festival marking the beginning of spring, the mid – point between the Winter Solstice and the Spring Equinox. For these Neolithic people the success of the coming farming year was very important. Stores of food would be getting low at this point and Imbolg fire rituals were performed to harness the power of the sun and ensure a plentiful food supply and a good harvest later in the year.

Imbolc derives from the Irish í mbolg meaning in the belly, this being the time of year that sheep began to lamb and grass began to grow.

The Mound of the Hostages is a Neolithic (stone age) passage tomb contemporary with Newgrange, which is over 5000 years old, so the cross quarter days were important to the Neolithic people, who aligned the chamber with the Imbolc and Samhain sunrise. In early Celtic times, around 2000 years ago, this was a time to celebrate the Celtic Goddess Brigid. She was the goddess of poetry, healing, and smithcraft. She was viewed as a protector of mothers and new born babies.

When Christianity came to Ireland in the 5th century, the festival became associated with St. Brigid of Kildare and became St. Brigid’s Day. The St. Brigid’s Cross while considered a Christian symbol may well have its roots in the earlier festival. It is traditionally hung on the kitchen wall to protect the house from fire.

Beltaine marked the beginning of summer and falls on the 1st May, it is associated with Bel or Balor the Celtic God of light, fire and the sun.

This festival marked the beginning of summer and was the time when cattle were driven to the summer pastures. Rituals performed were to protect the animals, crops and people, and encourage growth. Special bonfires were lit and their flames, smoke and ashes were believed to have protective powers. The people and their cattle would walk around the bonfire or between two bonfires or sometimes leap over the flames or embers. All household fires would be quenched and re-lit from the Beltaine bonfire. Doors, windows, byres and the cattle themselves would be decorated with yellow May flowers, such as primroses or buttercups, perhaps because they evoked fire and the sun.

Celebrated on August 1st and associated with the Celtic God Lugh, this was a festival to celebrate to first fruits of the harvest. It involved large gatherings that included religious ceremonies, visits to holy wells, athlethic contests, feasts and fairs. Often these events were held on hill or mountain tops. It was also associated with his foster mother Tailtiu, who legend has it, helped establish farming in the country. The Tailteann Games were held at this time of year and take their name from her.

Some Lughnasa customs have survived into modern times, events like “Garland Sunday” and “Bilberry Sunday,” echo the tradition of visiting holy wells and collecting the first fruits of the season. The custom of climbing mountains has also survived, though as a Christian pilgrimage. The best known is “Reek Sunday” the annual climb of Croagh Patrick on the last Sunday in July. Among the fairs; the Puck Fair and the Lammas Fair are survivors from the older tradition.

As people around the world now celebrate Halloween, many are unaware of its roots in the Celtic festival of Samhain. In ancient Ireland Samhain was the division of the year between the lighter half (summer) and the darker half (winter). At Samhain the division between this world and the Otherworld was at its thinnest, allowing fairies and spirits to pass through.

It was the time when cattle were brought back from summer pastures and when livestock were slaughtered for winter. All corn, fruit and berries were harvested and stored for the winter to come. As at Beltaine bonfires were lit, which again were believed to have protective powers.  Offerings of food and drink were left to honour the ancestors whose spirits might chose to visit at this time. This food was later ritually shared with the less well off. People wore costumes and masks to disguise themselves from harmful spirits. Legend had it that the “Banshee” could be killed by humans at this time of year and the “Pooka” (a mischievous spirit disguised as a large black horse) roamed freely.

Samhain was also a time to decide on future activities. A general armistice during this time made meetings between sworn enemies possible. Therefore diplomacy and social activities beyond tribal boundaries were possible and all debts had to be settled.