You are here: Home>Topics>Laught Sports Commemoration 1902 to 1962 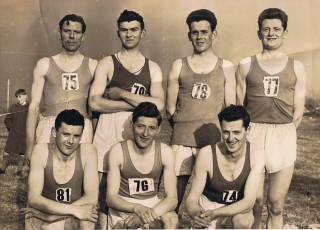 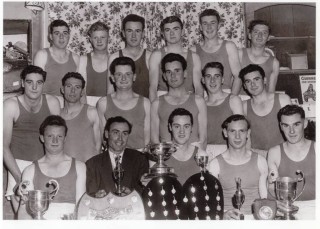 The famous Laught Sports Field nestled at a crossroads about a mile from Moylough Village in North Galway adjacent to the beautiful unspoilt Laught Lake. Laught sports field was flat, level and surrounded by sand hills making it an ideal arena for cycling and running. From a spectators point of view it was as good as any modern stadium, no matter where you sat on the grass-covered sloping hills that encircled the track you could see the complete race. The fantastic Laught Sports was held here every year from 1902 to 1962 and attracted cyclists and athletes from all Ireland. Laught was the home of the famous Mannion brothers Paddy, Jim, Petey, Mattie, Tom and Mick and the effervescent Michael Burke. They were champion cyclists. The Mannion brothers established the sport of cycling in The West of Ireland. They were suberb organisers. Because of them, Laught sports was one of the most competitive and best run meetings in the whole of Ireland.

One of the highlights of Laught Sports was the 10,000 meters, cycle champion of Ireland and consisted of 33 laps around the field. Cyclists came from all over Ireland to compete in this event. There was intense competition between the local lads and the outsiders like Mickey Palmer of Westport, Seamus O’Hanlon of Dublin and Cecil Steed Dunmore and many others. Laught Sports was also famous for its field events. It was always great to see Athletes of the calibre of Willie Morris, Tommy Madden and Kevin Ryan of Derrydonnell competing against the local heroes. It also had a great schools competition with up to fourteen schools taking part. The Laught cross country team were very well respected in the national circuit. A number of Laught runners featured in Galway teams that won many an All-Ireland Championship.

In honour of all the athletes, cyclists and organisers involved with Laught Sports over the years it was been decided to commemorate the sports by holding a special mass at Laught Old Church, followed by erecting a plaque at the entrance to the sports field on Friday 3rd August 2012. This commemoration will open the Moy Fest which takes place from August 3 to 5.