You are here: Home>Places>Mullaghmore Castle

Mullaghmore Castle is a ruin, only the very base of it remains, 35ft x 15ft. 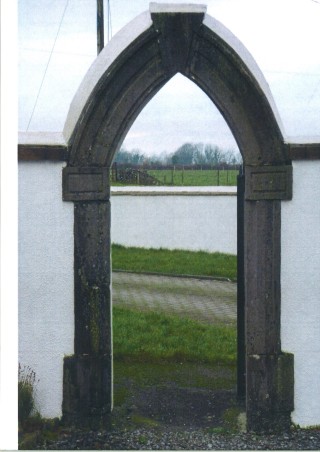 Mullaghmore Castle is a ruin, only the very base of it remains, 35ft x 15ft. It was part of a network of O’ Kelly castles including those in Moylough, Garbally and Monivea.

Judging by the impressive doorway which now stands outside Tommy Screene’s house in Windfield, it was a building of historic prominence. The cut stone doorway was removed by the landlord Jameson who owned Mullaghmore and used in the gatehouse of Windfield Demesne. During recent renovations to the gatehouse the doorway was move to the roadside entrance of the house.

Jameson owned the land in later years and he rented to the landlord O’Rourke, who is reputed to have knocked the castle.

Beside the ruins is a wide avenue (60ft) which appeared to have been lined with beech trees. One tree remains and by the circumference of it (21ft) it must be there over 200 years. The avenue led to a building, which is no longer there, known as the “Malt House.” In this building was a distillery which belonged to Jameson.

It is very likely that most of the best stones from the castle were used when the “Malt House” was built, as it is situated so close to the castle site. These stones were further recycled in the 1920’s when stones from the Malt House were used to build two houses for families moved during the division of the “Grow” (from Gruá the Irish for the brow of a hill) lands. These houses were Dempsey’s and Lanes. Dempsey’s house was knocked some years ago and the good stones were used to build the flower bed near the “long” door at the back of St. Patrick’s Church, Moylough. Local historian John Doyle told that Rev. John O’ Rourke of Moylough, removed the bulk of the stone from Mullaghmore castle in the 1800’s. He had a lease on the “Grow” lands in Mullaghmore at that time. The stone was drawn by horses and carts to Moylough to build a high wall around his house (now Reynold’s house). Rev. O’Rourke had a deep hatred of Catholics and when St. Patrick’s Church was being built he immediately closed up a window and built the wall around the house to block his view of the Catholic Church.