A Brief Archaeological Study on some interesting features situated in Mullaghmore. 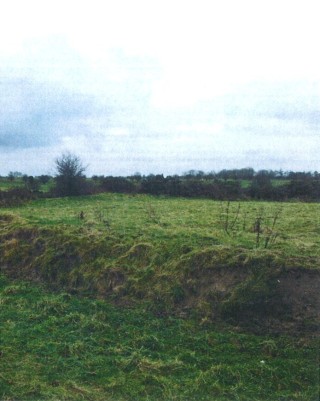 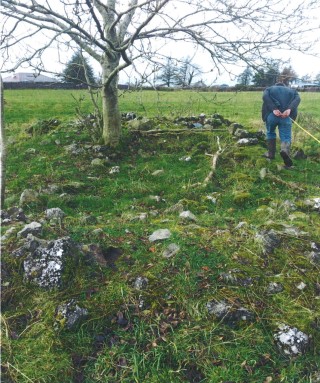 Little is known about the origin of our Irish Townlands, or how the Townland boundaries got their shape.

In the case of Mullaghmore, the townlands seems to be centred on an area of very good land which stretches north to Cooloo where the land is uneven with a line of Eskers. To the South, it goes to Ballinruane where the soil gets light with a lot of loose limestone and to the East is Lakeview Turlough. Many people travelling on the N63 road have remarked on the good land to the South from Moylough to Scarry’s Cross in Brierfield.

The Townlands of Mullaghmore North, East and West have clay bank hedgerow field boundaries, except for some stone boundary walls between each Townland, while Mullaghmore South has almost all field boundaries of single stone walls. This shows the change in the land as limestone becomes more plentiful as one moves South towards Ballinruane, which is a totally stone wall area.

The shape of our landscape was very much determined by the movement of the Glaciers over 10,000 years ago. It is possible that it is from this legacy that Mullaghmore got its name. The name Mullaghmore translates to Big Hill or Big Mound. There is a long ridge of rich grassy Drumlin hills running from (Mattie’s hill) in Boyles land in the South West to John Byrnes land Carrownabo in the North East, right through the centre of Mullaghmore. These hillscontain yellow soil (doubhbuí). There is evidence of excavation of Doubh from one of these hills in Morrissey`s land near where the Mullaghmore road cuts through the Drumlin at Morrissey`s turn. This Doubh was used locally to make a morter for building stone walls and buildings. Also in the centre of the Townlands there are five large hills of sand and gravel, four to the east of the line of Drumlins and one on the west side and close to the Drumlins. This hill is known locally as RathMór and was said to be used as a ceremonial hill in the time of the Gaelic Chieftains.

A large area of land in Mullaghmore West is known as “Grow”. Another area of land in MullaghmoreEastknown as “Sean’s” is named after Sean Geraghty, a herd’s man in his time. These to land areas and the area between them had very few houses as most of the tenants lived on the outer regions of the North, South and East. The good grazing lands were probably kept free of tenants by the ruling land owners. The total area of the four Townlands is just over 2000 acres.

The land was tilled over the years but it seems to be more suitable for cattle and sheep. There is also a good deal of gorze around the foothills of the drumlins.

This is a substantial ring fort located on Hussey’s land. It is a uniform circular structure which is 60 yards across. The moat is still in good repair although gorse and briam cover the outer rim. There is a uniform depression about 15ft x 40ft in the centre of it which suggests that there was souterrain in it.

This appears to have been a Cillaghaunor a children’s burial ground although it seems to have disappeared from the landscape.

This is an elevated lios or mound. From the top it commands a great view of the countryside. It is thought that the hill was used in times past for the inaugural site of votingin the leader of the O’Kelly Clan. There is supposed to be four cairns of stones one at each corner, although with scrub and grass, they are not visible now.

This is the ruin of the castle of the O’Kelly’s. It was linked with O’Kelly’s in Moylough, Garbally and Monivea. Only the very base of the castle remains. 35ft x 15 ft