You are here: Home>Places>Moylough Castle 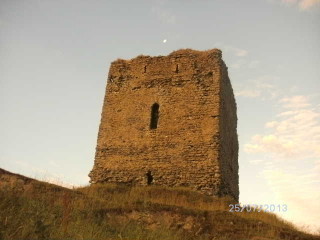 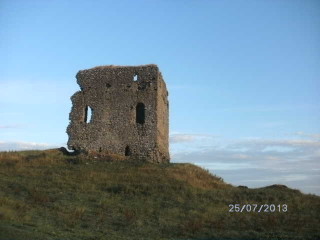 Moylough Castle is described as a rectangular keep or hall house dating most probably from the first half of the thirteenth century – between 1235 – 1240. While detailed manorial records are rare we have identified two English landowners by the names of de Cotterals and de Cogeshales who in all probability may have built or were tenants of the Castle. Around this time the area around Moylough was known as Ui Diarmada and had been ruled by the O’Concannons. Richard de Bermingham held the area during the invasion.

The Castle is situated on a slight elevation about half a mile west of Moylough village, overlooking the low marshy lands bordering Summerville Lough.

It comprises of three stories built throughout of local limestone rubble set in hard whitish lime mortar. Gravel from nearby esker ridges would have been used as the core. It measures 12meters in length 6.6 meters in width. The walls are 2meters thick and rise to a height of 14 meters and strengthened by a base batter which is the outward slope on the wall which adds stability to the castle. It survives to roof level on three sides but the south west wall has now collapsed. The entrance is at first floor level and a timber stairs probably gave access to the door.

The ground floor was probably used for storage and maybe as servants’ quarters. Seven narrow vertical loop windows lit the room. The first floor is lighted by narrow windows with semi circular heads; the best preserved one on the North West wall. Their size indicates they were constructed for light rather than defensive purposes. No evidence of a stone stairs leading to the first floor survives but it can be assumed that the first floor was accessed by a timber ladder through a hole in the floor.

Strong timber beams built into the long side walls supported the timber floor overhead. The slots are still visible today. Holes for draw – bars are still evident, presumably to secure shutters. The second story had a timber floor also. A steep spiral stairs led to the wall walk and battlements. The roof would probably have been made of thatch or wooden shingles. Most doors had a single leaf and opened inwards but in Moylough an interesting feature on the north east wall is a recess which accommodated the door when fully opened.

There are no indications of fireplaces within the building as it survives today & in similar rectangular hall houses elsewhere these may never have existed as permanent architectural features. Latrine accommodation is also lacking but if you compare it to hall houses in Athenry & Green Castle Co. Down, it could have been situated at first floor level diagonally opposite the entrance, in the now collapsed west angle.

The time needed to construct these halls varies. The quarrying of rubble, preparation of wooden frame works, floor beams and other materials required time, as did the necessity to allow each course to dry before starting the next. The optimum height per building season for church towers and castle keeps was 10 to 12 feet so a structure as large as Moylough or Athenry would have taken several seasons to build.

The presence of good architectural detail in Athenry indicates a date of c.1250 but based on structural evidence alone, its estimated that Moylough may have been erected nearer the beginning rather the middle of the thirteenth century.