Celebrating our natural and built heritage 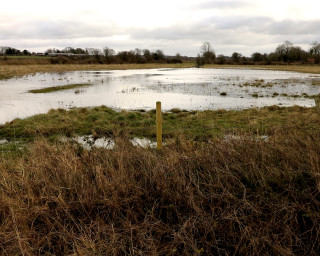 Located in front of Michael & Roisin Ryans house, the cattle pound was privately owned by the Leech family. The pound would have been in existence until about 1930’s. Its function was to house/hold cattle before and after fairs in Moylough. Farmers used to hold cattle overnight before taking them to the fair (in the village) early in the morning or to hold them after purchase before returning home. At that time all cattle were driven on the roads by foot. The Leech family charged a fee and would herd/watch the cattle from their house as the pound was directly attached. The pound was also used for holding stray animals.

The well was located in the Parish Sportsfield. It had a stepping stone entrance from the road and also stepping stones down to the well itself. It was the main source of drinking water for the neighbours. The well remained in use until the implementation of the County Council water scheme in around 1962-1962.

Moylough Parish Sportsfield at Patch, Moylough , containing 8 acres 2 roods and 30 perches formed part of the Duggan Estate in the Barony of Tiaquin, was purchased by the local community of Moylough from the Irish Land Commission in 1971 and was held in trust by five trustees for use as a Sportsfield,Park or pleasure ground for sport and games.

In 1971 it the land was used for rough grazing and practically overgrown with furze, briars and gorse. Due to the foresight, drive and community support and commitment of the late Rev Fr.Timothy Murphy (1900 – 1991) Parish Priest the land was reclaimed, drained and fenced.

The grounds are regulated by the Trustees and Moylough Sportsfield Committee and they are responsible for the maintenance, upkeep, development, funding, payments, grants, insurance, water supply, electricity supply, lighting, showers, toilets (including wheelchair accessible toilet) waste and use, and care of the grounds and all facilities. The local community provided a huge amount of voluntary work including fundraising to first develop the playing areas and gradually build dressing rooms, ball alley, bowling green and other sporting facilities.

The facilities developed since 1971 include Playing and Training Pitches. Gaelic, Soccer, Camogie, and Community Games, three dressing rooms were built with showers and toilets, Handball Alley, Tennis Court, Modern Children’s Playground, Outdoor Bowling Green, wheelchair accessible toilet, lighting in training area, Viewing Stand, Dug- Out, Storage Building, Roadside Parking with safety posts along the footpath, wheelchair entrance, A walk way around the perimeter and is used by all age groups. A Grotto built of stone with a statue of ‘Our Lady’ is centred in the front facing.

Since 1987 Fas/Solas workers supervisors and sponsors have continued to carry out and extensive amount of work in a dedicated, consistent and committed fashion. The All Ireland Sheep Shearing Competitions were held in the Sportfield in 1999.

An open view from the public road is maintained and helps to create a safe and friendly environment. The playing and training areas are sheltered on the South, West, and North by a large variety of mature trees including Oak, Ash, Poplar, Silver Birch, Mountain Ash, Sycamore, Pine, Spruce, Elder, Crab Apple, Horse Chestnut, Willow/Sally and Hawthorn. The local GAA Club, Soccer Club, and the Community Games Committee subscribe to the upkeep and maintenance of the facilities, together with many large sums of Grant Aid and local funding.

The Culvert is a narrow bridge which drains water from surrounding lands into the Turlough. A Bench Mark is a permanent point that lies at a known elevation. A Benchmark is usually a mark on an existing object, for eg on a wall of a building, bridges or stone gateposts. The Bench Mark on this Culvert is etched into the top stone and marks a height of 231.5 feet above sea level.

The Turlough is one of many Turlough to be found west of the river Shannon and is a unique type of disappearing lake found in limestone areas. The name comes from ‘Tuar’ Irish word for dry and ‘Lach’ meaning a place. The Turlough comes in flood after heavy rainfall and gradually disappears after a few days. It provides a habitat for birds such as Mallard, Snipe, Lapwing, Geese, Moorhen, Curlew, Teal, Widgeon and Swans, and plants such as Silverweed, Water Croft, Rushes, Sledge, Black Turlough Moss and Meadow Sweet. When flood waters recede in the Turlough rich deposits of calcium culminate which provide excellent nutrient summer grazing for cattle and sheep.