You are here: Home>People>Our Irish Women

The Inaugural Meeting of the Moylough branch of the Apostolic Work was held in Moylough Parochial Hall on the 12th October 1965. 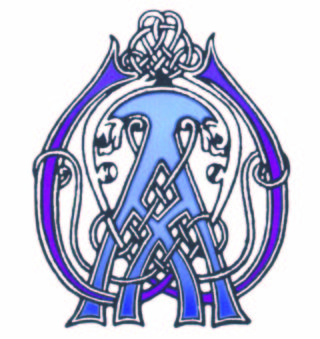 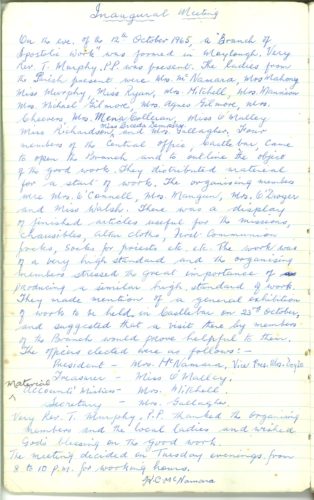 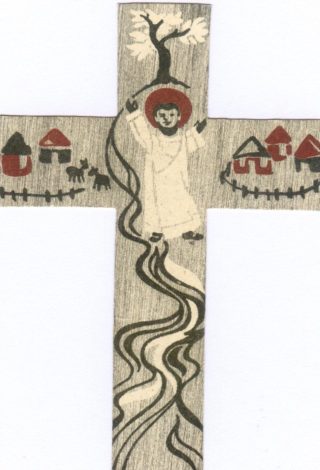 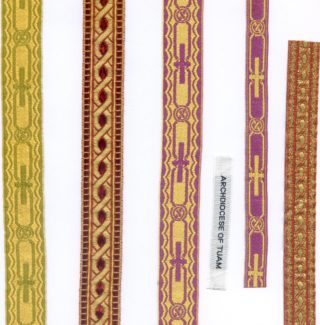 Apostolic Work Ireland was founded in Belfast in 1923 at a time when missionary work and religion were flourishing in Europe. The main objective of the association was “To share in the missionary apostolate of the Church by prayer, and by supplying material and financial aid in those areas where the Church is not yet fully established. To sanctify members’ lives by their participation in Apostolic Work”.  Its aim was to offer Masses, Prayers, Holy Hours, and Holy Communion as spiritual gifts for the missions.  Material gifts were presented in the form of vestments, Mass gifts and sacred vessels.  Funding for the association was sourced from donations, fundraising and subscriptions.

It was a further forty two years later, on the 12th October 1965, that the Inaugural Meeting of a branch of the Apostolic Work was held in Moylough Parochial Hall. This meeting was attended by Very Rev. T.Murphy PP and fourteen ladies from the parish.  Four ladies from the central office in Castlebar also attended on the night to help establish the group and to outline its aims and objectives. They had with them a presentation of albs, altar cloths, chasubles, First Communion dresses, socks for priests and various other knitted garments for babies and children. All were finished to a very high standard. The new group were left in no doubt that only impeccably finished work was acceptable.  This policy has remained within the organisation to this day,“What is not good enough for God at home, is not good enough for him in Africa” words of Fr. Rross, a Mill Hill missionary priest at a founding meeting in 1923.

The Moylough branch, under the guidance of its first officers, President – Mrs McNamara, Vice President, Mrs Doyle, Treasurer, Miss O’Malley, Accounts Mistress, Mrs Mitchell, Secretary, Mrs Gallagher set about their work with great enthusiasm and pride and began what was for many a lifelong devotion to the missions through their prayers, sewing and knitting.  The Castlebar office provided the rule books, patterns, and materials including cloth, cotton thread, wool and winceyette. Using these materials the ladies handmade children’s pinafore dresses, little pants, tea shirts, night dresses, knitted jumpers and socks. They also made vestments, alter cloths, small linen, stoles and chalbs. They hemmed the braid on stoles front and back, and on the vestments in the shape of a cross.  Finished goods were then sent back to the Tuam diocese’s headquarters in Castlebar and posted to the missions

All of this work was very often done late in to the night. The ladies worked diligently and quietly in their own homes always after having done a hard day’s work of cooking cleaning and caring for the family as well as either helping run a family business or tending to animals and helping with farm work. They produced impeccable goods knowing full well it would be returned for ripping should something be noticed during the inspection.

Every Christmas a sale of work took place in the Parochial Hall. Here people could purchase items, all lovingly made by the very gifted ladies of the parish. The proceeds of the day were also sent to the Missions. Another annual sale of work and Mass took place in Castlebar to which affiliated branches were invited.

Apostolic work in Moylough continued until the 1990’s when it was no longer economical to buy materials or to fund the postage of parcels to the missions.

We are indebted to Mrs Anne Ryan, Trasternagh, and Mrs Peg Fanning, Moylough, Moylough branch of Apostolic Work and to Mrs Mary O’Connor, National President of Apostolic Ireland for their help and support with this article. The work of this society is being celebrated as part of Our Irish Women Exhibition at the National Museum of Ireland, Country Life, Castlebar