You are here: Home>People>Enda Colleran

Colleran one of the greatest footballers of all time in his own right. 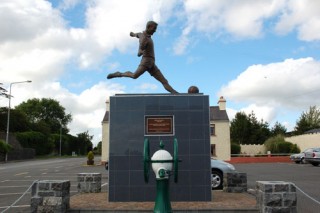 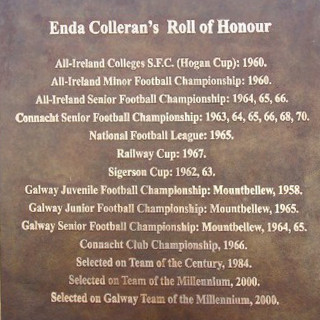 The statue of Enda Colleran in the town of Moylough in east Galway is easy to find. Coming in from the Mountbellew side on the N63, it is on the right hand side of the main street, in a little square area, with a post office directly across from it. It is strikingly impressive. Standing on a large concrete plinth over seven feet high, a bronze Gaelic footballer is about to strike a ball off the ground with his right foot. He is in full technical pose; arms outstretched appropriately, left foot in front, anchored on the ground, right foot about to strike. For those who can remember the great Galway three-in-a-row team of 1964-66, the pose is one which was once a very real and potent living image. The sculpture is based on a real photograph of Colleran, pumping a kick-out off the ground during his heyday, something he was famous for throughout his career. While the statue itself is relatively easy to describe, it’s much harder to know where to begin with the man. Enda Colleran was born in 1942 in Moylough. He won his first All-Ireland medals in 1960. He was on the St. Jarlath’s College side that won the Hogan Cup that year and also on the Galway side that won the All-Ireland Minor Football Championship the same season.

Inevitably though, he will be remembered as perhaps the best player from the Galway team which won three All-Ireland titles in row in 1964, 1965 and 1966. Lining out at right-corner-back on all three teams, those games made Colleran a legend. He captained Galway in the 1965 and 1966 finals and is one of a select number of players to have captained their county to All-Ireland glory on more than one occasion.

On the side of the statue is a plaque with a list of all the medals and accolades Enda Colleran received. It makes for astonishing reading. He literally won ever major honour he possibly could have. His career pre-dated the All-Ireland U21 Championship and All-Ireland Club Championship, and every other conceivable top honour is on his list.

As well as all his team honours, Colleran has been marked out as one of the greatest footballers of all time in his own right. He was named on the GAA Team of the Century in 1984 and on the GAA Team of the Millennium in 1999, one of just two Galway men along with Seán Purcell to be named on both teams. Enda Colleran was the only member of the three-in-a-row generation to be honoured in this way.

Away from the football fields, Enda Colleran worked as a teacher in St. Enda’s College in Salthill, and also worked as a pundit on RTÉ’s The Sunday Game programme. After his playing career ended, he managed the Galway senior football team.

He died very suddenly at the age of 61 in 2004. His tragic death was met with great shock throughout Galway and Ireland as a whole. There were many profound and heartfelt tributes paid to him when he died. The then Galway chairman Frank Burke said: “Enda Colleran was one of the greatest Galway people I have ever known. Apart from his distinguished service to Gaelic football, he was also a wonderfully genuine and sincere person, who took a positive view of everything.” Pat Donnellan, one of his teammates from the great Galway team said: “He regularly went to the gym and kept himself in great shape at all times. He didn’t smoke and it was rare that he took a drink. He carried himself very well, we saw that from his days on the television when he commanded widespread respect.” Just two years after his death, the Enda Colleran Weekend was organised in his honour. Attended by former teammates, opponents, family and friends, it was at this event that the life-size bronze statue of the Moylough man was unveiled in his native town by then GAA President Nickey Brennan.

The statue was sculpted by a former pupil of Enda Colleran’s, John Coll.