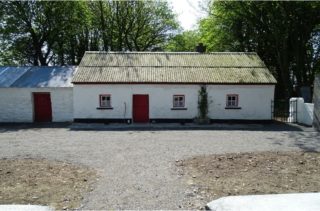 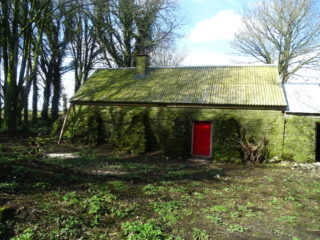 Back of Cottage
MH

This traditional Irish cottage is situated in Mullaghmore South, Moylough, Co Galway.  It was originally owned by  Kellys, followed by  Husseys  and is currently owned by the Burkes.

These buildings are typical of the homesteads of the Irish tenant ‘’small’’ farmer of the end of the 19th and early 20th century. These farmers were classified as ‘’small ‘’ farmers because they were leasing between five and thirty acres of land from a landlord .They could only afford to build very modest homes such as this one. By contrast the better–off or ‘’strong’’ farmers, those leasing thirty plus acres, built more substantial homes. The ‘’small’’ farmers were mainly in the West of Ireland whereas most of the “strong”  farmers were in Munster and Leinster.

Prior to the famine the Irish peasants, for the most part, lived in mud cabins with a chimney but often without windows. Pre-famine mud cabins were typically one room structures. As this house is a stone and mortar structure it was probably built sometime after the famine of the 1840’s

The walls of these houses were particularly thick or deep. Thick walls were necessary to carry the weight of the roof and also as a form of insulation against the cold. Originally the roof on this house was thatched. Thatched roofs, be they of oaten, wheaten or barley straw, provided excellent insulation against the cold in winter and  prevented the house from getting too warm in summer. The thatch roof on this house was replaced with a corrugated iron roof probably at a time when the art of thatching was dying out and straw may have become scarce.

The front elevation, with its three small windows and  half door is typical of the period. The windows at either end are the two bedroom windows and the centre one is the kitchen window. As glass was expensive windows were small. The front door, often directly across from the back-door, opened straight in to the kitchen. The half-door, when opened at the top, allowed extra light in to the kitchen while at the same time the closed bottom part kept small children in and the breeze and fowl out.

Sites for houses were carefully chosen. Where possible they were built where local terrain afforded some shelter against wind and rain and often faced in such a way as they would have maximum benefit from the sun. Out-offices were close to the farm house thus providing extra shelter as well as having the animals near-by for the farmer especially during the winter months.

In 1855 it was owned by the Kelly family and recorded as property number 9 on Griffiths Land Valuation.     http://www.askaboutireland.ie/griffith-valuation/

It was also a stop for Bianconi coaches.

Michael and Mary Kelly together with their four daughters, Honor, Margaret, Winifred and Ellen lived in this house in 1901. Neither Honor nor Margaret are recorded as living here in the 1911 census.

It was later owned by a Hussey family who were connected to the Kellys through marriage.  After the last of the Husseys died the cottage fell into disrepair but, with the help of its current owners Eugene and Winnie Burke and Moylough Heritage Society, the cottage has been given a new lease of life.