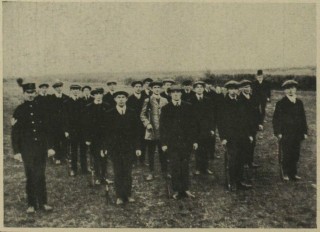 In 1910 James Haverty of Springlawn, Mountbellew was sworn in to the Irish Repulican Brotherhood (IRB) in Athenry. He then formed an IRB “circle” in Springlawn with himself as “centre”. The members of the “centre” trained on the local roads. However there was some opposition to the circle.  In his “Memoirs of an Ordinary Republican” J.Haverty outlines the opposition of the RIC and the local priests.  There was also definite Pro-Redmond support in the locality.

By the time Eoin MacNeill founded the Irish Volunteers in 1913 the Springlawn IRB circle had been in training for three years. Sean O’Neill in his Witness Statement stated that when he come to Mountbellew “they were as good perhaps as could be seen anywhere in Ireland”. The Springlawn Volunteers were typical of many volunteer units: small in number, links to GAA and IRB and often had brothers as members.

Sometime in 1913 an Irish teacher from Ballygar took a photograph of the Springlawn Volunteers which appeared in The Illustrated London News on Feb 7th 1914. O’Neill in his Witness Statement says that in 1914 “we had James Haverty as ‘centre’, Michael Mullin, Jack Leahy, Paddy Mullin, John Higgins, Tim Healy and perhaps a few more all from the Moylough area….as time went on some additional recruits from the IRB from Ballinhuttna, Newbridge, and Caltra were sworn in….three of us were living tn the town (Mountbellew), Larry Raftery, M (Martin) Leahy and myself (O’Neill)”.

The Springlawn Volunteers were  part of the 1916 rebellion plans for County Galway. As part of the plan they were to assemble at the back entrance to the Grattan Bellew estate on the Mountbellew-Tuam road. They were to wait there until the command would come informing them when they were to leave for  Tuam where  a train would be waiting to take  groups of Volunteers, including the Springlawan volunteers, to Athenry. O’Neill stated:”Only when the general mobilisation order of 1916 was issued did things get brisk. Paddy Mullin of Springlawn, Moylough was the local mobiliser or courier who carried out the task of notifying all our IRB members. I think it was the evening or the Saturday before the Rising. Each man was told to be in readiness at a moments’s notice – and to take his rations with him and whatever weapons were available…we met, it could be Sunday night about 15 of us…Here we were informed by James Haverty that a rising was to take place….and that a further word from Tuam would come as to what we were to do”.

They waited but the order to go to Tuam did not arrive.  Dunleavy in his Witness Statement states that the Tuam volunteers had been waiting for the men from Mountbellew. Like the volunteers in Mountbellew there were Volunteers in Mullagh, Loughrea and West of Spiddal also waiting for instructions which never arrived due to the confusion following MacNeill’s countermand on Good Friday.

O’Neill recalled that “the men from Mountbellew disbanded with a heavy heart and an occasional tear drop. We were sad, not because we were ordered to disband but, force of circumstances prevented us from being in the thick of it and to help our gallant comrades in Dublin.”

The Royal Commission on The Rebellion in Ireland 1916 recorded that “no contingents went to Athenry from Ballinasloe, Mountbellew, or Portumna districts.

Many of the Springlawn Volunteers participated in the War of Independence 1919 – 1921.

Click Here to view and help identify anyone in this photograph